4. During the same period, Mr. David L. Brailsford, Mr. Gordon Pancotte 7 Mr. Harry Bates also made 4 separate meetings with the Registry of Societies at the Police Building–EU TONG SEN ROAD to finalise and submit the Constitution of the proposed Association together with the relevant registration documents for registration.

5. 11 months later, no respond was received from the Registration Department or from the Government Department or the Sports Bodies in Singapore.. Due to the no response from the above bodies, we – the Pro-tem Committee seek the advise of a Law firm, several letters were sent and enquiries were made by the Law firm with the Registry of Societies.

6. In June 1979, The Prime Minister of Singapore visited England. Mr. David L. Brailsford had the opporturnity to discuss with the Secretary to the Prime Minister In London matters regarding the registration of the proposed Association. On 21st August 1979, the Registrar of Societies officially informed the Pro-tem Committee that the registration of the Singapore Swimming Teachers’ Association was not approved.

They Called Him, Whacker! 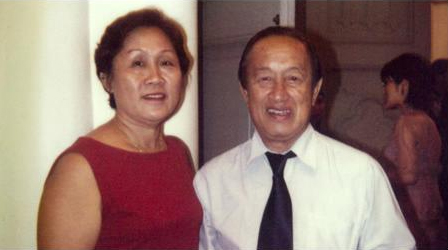 Married for 43 years, Chee Han and Helen exude great passion for life. They met each other in 1964. Helen was then working in an Officers’ Club at Naval Base and Chee Han was then an apprentice trainee engineer there. They started going out with friends as a group before they got together. Helen’s friend had nudged her on with the advice that although Chee Han “looks short but he’s a nice guy and is soft hearted.” Popularly known as “Whacker” to his friends, Chee Han was reputed to be a very good fellow. Chee Han subsequently bought a house at Casuarina Road and asked Helen to be the trustee of the house. They tied the knot in 1969.

Chee Han and Helen have stayed in the same house ever since. One would not have guessed the age of the house by its fascade or its interior. To the Foos, “age is just a number.” Growing old was certainly not in their vocabulary. “We never thought of it.” At 72, Chee Han possesses the same drive and determination that he had as a young man. When I arrived at their house in the later part of the evening for the interview, Mr Foo had just returned from his volunteer work coaching a group of handicapped children from a special-needs school in swimming and water safety. Work keeps him busy as the President of Singapore Swimming Teacher’s Association and Founder of TAEC (The Aquatic Education Centre).

Age does slow both of them down physically but they remain mentally resilient. Chee Han described how he was recently stunk by a bee and was out for two days with high fever and vomiting but he was quick to bounce back to resume his routines. Helen believes that one needs to stay active and she too has her regiment of morning walks and exercise. Caring for her grandchildren occupies most of her time but she also enjoys being outdoor in the company of friends. Helen also accompanies her husband on numerous overseas business trips. Despite Chee Han being a professional swimmer, most people would be surprised to learn that Helen can’t swim. She had swimming lessons but prefers to stay under the shade and maintain a healthy complexion than training under the scorching sun.

A British friend once related to Helen why they called Chee Han a “Whacker.” At the age of 5, Chee Han started swimming and became an avid swimmer. He would “whack” all the boys in competitive swimming, finishing way ahead of them. Hence, the nickname “Whacker” was coined and it stuck with him. As his swimming talent grew leaps and bounds, Chee Han earned his first swimming medal when he was 8 years old. Swimming became his life. Friends would eagerly boast about Chee Han being the first Singaporean to swim across the Johore causeway. The highlights of his competitive swimming was during 1957 to 1959 when Chee Han became Singapore’s top swimmer for 1500m freestyle event and three-time champion in the Merdeka Cup (now known as the ASEAN Games).

Accolade after accolade, an accident on 29 February 1960 almost derailed his future. He was riding a bicycle to work near Naval Base swimming pool when he was ran down by a taxi. He suffered a fractured left leg, a dislocated kneecap and the left side of his face was torn. Thankfully, two British Naval surgeons who were passengers in the taxi attended to him and immediately sent him to the General Hospital. Waking up after two weeks in coma and being warded for 6 months, the doctors advised Chee Han that he should not swim anymore. The news came as a sudden blow to him as the Asian Games was just around the corner. Just days before the accident, he had clocked the fastest times in all his events during the Asian Games trial and was looking forward to compete in the games. On May 2, 1962, he made the sports headlines in The Malaya Mail “No Games Bid’ Order to Swim Star. Leg might get worse doctor tells Foo.” Being the “Whacker” he was, Foo was not one to give up easily. For two and a half years, even when he had to report to the hospital for daily treatment, he trained on his own jogging slowly and even pedalled his bicycle with one leg. Gradually, he got back his confidence and proved his critics wrong when he won the 400m freestyle bronze at the First Singapore Open in 1963. His comeback was a personal victory and also marked the turning point in his career from competitive swimmer to coach.

Foo began his professional coaching career in swimming at the Singapore Island Country Club before venturing out on his own so that he could spend more time with his children, Meng and Debra. In 1965, Chee Han took his passion to another level when he pioneered Singapore’s first young children and infants’ programme. “The children and babies simply love Chee Han,” said Helen. When Chee Han holds a baby, he could immediately sense whether the child was terrified of waters. In 1997, he established a swimming school – The Aquatic Education Centre (Bables & Infants).

God has been kind to me,” remarked Chee Han, who used to be a Sunday School Teacher when he was at Naval Base. It had been a rough journey growing up in the 1940s. His mum passed away when he was young and his dad, a cook with Royal Naval Air Station, could barely made ends meet. He recalled days where he drank only water and went to bed on an empty stomach. Now having survived an accident, a heart attack, dengue fever, a back operation and 3 scopes, he remains truly grateful to God. On one occasion when he was down with flu for three days, his friend had encouraged him to play a game of tennis to sweat it out. As he sat down after the game, he turned completely pale and thought, “It was time to say goodbye.” Apparently, the bottom part of his heart was damaged and the doctor was certain that if Mr Foo had not been a sportsman, he would have succumbed in that instance. When the going gets tough, the tough gets going. All these tough times have inspired Chee Han to want to help others and he does it best through his passion for swimming with the encouraging support of Helen.

Today, he has taught three generations of children to swim and continues to impact the lives of others. Whether his student is an autistic kid, an amputee or a paralysed man, Chee Han coaches them not only in swimming but offers them a glimpse of hope to take on life’s challenges and not give up. It has become the Foos’ motto to “be first to lend a helping hand to others especially when they are down and out and to stay humble always.”

Chee Han and Helen view life as “a precious gift from God and should be lived to its fullest.” As I took my leave, Mr Foo expressed his pleasure in his favourite hymn of “Amazing Grace” that was recently sung during the Holy Communion that Sunday and he exclaimed, “that really made my day!”